Now there is no sense to convince the owners of houses of inefficiency and the danger of brick chimneys. After all, it has long been clear that even existing systems must be cabled or changed to something modern. One of the brightest representatives in this category are stainless or ceramic chimneys in the form of composite or modular structures.


For outdoor installation we offer combined chimneys - inside a ceramic pipe and then a heater and outside the mirror stainless steel. Such chimney pipes have the advantages of heat-resistant ceramic pipes and are easier to make with stainless steel than those installed in a claydite-concrete mine. 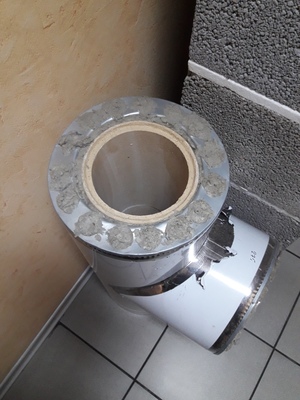 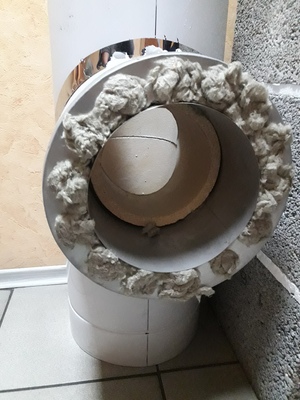 Steel pipes, including double-walled ones with insulation are known to the modern consumer, but ceramic chimneys are a novelty for the majority. Until recently, ceramics was one of the business cards of elite houses, but recently gaining popularity among ordinary people, which can be called a rather strange phenomenon. Judge for yourself - it has a fairly affordable price, with the advantages of more than a brick.


Few people in the course, but the construction of chimneys through hollow rods of chamotte were still French builders in the early 80's. A few years later, this technology became popular throughout the western world. To Ukrainian consumers, it came only in the late 90's.


Ceramic chimney, as already mentioned, is a composite structure that includes: a chimney duct made of ceramic; layer of insulation or air gap; outer layer of expanded clay concrete.


Such a serious design is due to a number of factors. First, the ceramic pipe that forms the chimney channel is very fragile and needs support. Secondly, it has a high thermal conductivity, which requires reliable thermal insulation. The pipe itself is made of a circular section, the length of which is from 30 cm to 1 m.


Its internal walls are smooth, while on the outside are allowed roughness and minor defects that do not affect the integrity of the structure. Pipes are connected by means of a lock, which is a thinning along the outer diameter from one edge and expansion of the inner one from the other.


It is extremely important that they dock strictly on one central axis. The outer shell is made of claydite-concrete in the form of a square with a radial cavity inside. The height of the block depends on the manufacturer, as well as the shape of the inner cavity. It is also provided either direct contact of separate parts of the unit to the pipe, or the presence of a place for a heater, which is connected by means of metal bridges. They are attached to the outer shell and provide a reliable support for the ceramic pipe.

Heat insulation should be tightly laid between the ceramic pipe and claydite-concrete block. As a result, a high-strength composite material with low thermal conductivity and ideally smooth heat-resistant channel walls will be obtained.

In the ceramic chimney the main load falls on the pipe. But thanks to the achievements of science, which have significantly improved the properties of ceramics, such chimneys have become very popular, and are actively used with solid fuel, gas, condensing boilers, boilers with a closed combustion chamber and liquid fuel.


Among their advantages is the following: heat accumulation and high heat capacity; high strength and vibration resistance; a wide range of acceptable temperatures - from 350 to 1400 ° C; high-quality soundproofing; It is not exposed to open flames and does not pose a hazard in case of ignition of ash; can withstand temperature changes without harm to yourself; not subject to corrosion and acids; smooth inner surface; long service life.


But there are also cons: the material absorbs moisture; large mass of the structure; it takes time to warm up; for the construction of such a chimney you need to have the appropriate skills, and therefore without the involvement of specialists can not do.


In the rest, the ceramic chimney at times better than brick and at the same time in no way inferior to the metal one. But it is worth noting that they have different advantages. Ceramics is more suitable for bathhouses and fireplaces, and for connection to solid fuel boilers.


For baths and fireplaces, ceramic chimneys are primarily needed for convenient operation and ensuring aesthetics. It is worthwhile to understand that due to modern high-power boilers the substantial inertia of heat-intensive ceramics can become critical for their joint use.


But in the bath it will be a plus, as well as in the fireplaces, because they do not need to immediately switch to the operating mode. When installed in a bath, the ceramic chimney must be protected from increased humidity, since lightweight concrete absorbs moisture over time, and thus reduces the thermal insulation properties of it and basalt wool.


As for the fireplaces, there must be vertical chimneys in them, which can be hidden in the wall. Therefore, the ceramic option will be very useful.


As it was said above, the chimney is a key part of almost all heating devices and how it is properly installed, the work of the heat system depends. If you make a mistake in the installation, then the probability of destruction of the chimney and the smoke of the premises is high.


Most often used ceramic chimneys in three layers, which is distinguished by the presence of ceramic components among the claydite part. Among their advantages are heat resistance, carbon black resistance, a large choice of diameters and ease of installation.


Of the shortcomings can be noted only a lot of weight; shaft ceramic pipes, which can work with almost all types of fuel, but for their installation it is necessary to attract a specialist. The most popular among our fellow citizens is the "three-layer chimney" system in view of extreme conditions in most of the country, when in summer it can be + 40 ° C and in winter -30 ° C.